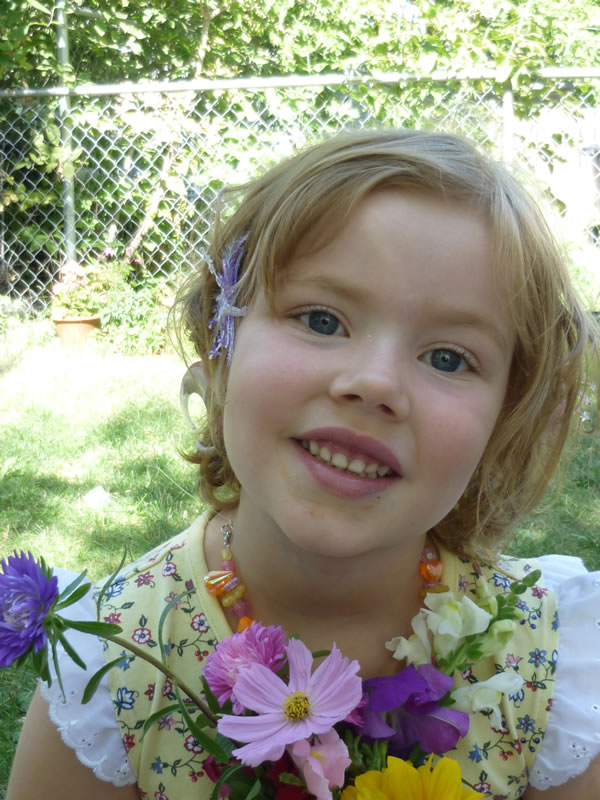 When Corrina was a baby our friends, family and even strangers, generously commented on her bright eyes, big smile and social personality. Whether she was waving, cooing , or making silly faces, baby Corrina was always engaging the people around her. Little did we know that Corrina had been born profoundly deaf. And though her world was full of love and joy, she had never heard the wonders around her.

During a regular lunch at a friend’s house, another parent commented on Corrina's vocal sounds and mannerisms, inquiring how Corrina's hearing was. The gentle wisdom and inquiry from this friend, who has a niece using cochlear implants successfully, was the first step toward a journey we never imagined being on with our daughter.

Just past Corrina's first birthday, we received her definitive diagnosis of a profound hearing impairment. With the support of the audiologist and auditory verbal therapists at the Central Speech and Hearing Clinic we chose to pursue Cochlear Implants for our daughter. Corrina received her first cochlear implant at the age of 18 months, followed by a second implant at 23 months. The transformation has been revolutionary.

Following the activation of Corrina's implants we were stunned and amazed when she started to imitate simple sounds and words beyond her infant babbling of "aaaaaaa." We were so glad when we could call her from across the playground and she actually turned and looked for us. It was a lesson in patience as we heard Corrina's calls to us change from "AAAeeee" and "Oommy" to "Daddy" and "Mommy."

At first, people could only speak to Corrina through us, as we translated her squeaks and slurs for others to understand. Soon though she was speaking to friends and family on her own, and holding conversations about a whole range of topics. Then she started doing things we never knew that she'd be able to do. She was talking to relatives on the phone, started recognizing favourite songs on the radio, and even started to sing. We were (and continue to be) stunned and amazed at the things she has achieved in such a short time.

For most children language development takes shape through constant sound exposure that occurs since before birth, however for Corrina we learned that we would need to actively work toward language learning. Looking back, I think we had a stronger relationship with our auditory verbal therapist over the first few years than we did with our families! Without the help of our auditory verbal therapist we wouldn't have known to teach Corrina her name using a clever little game of call and response involving a lot of play jewellery and stickers. When we struggled with discipline and guiding the behaviour of Corrina in the absence of normal language skills we turned to Central Speech for ideas, strategies, and support. When we enrolled Corrina in school it was once again the Central Speech and Hearing Clinic that helped us navigate the support of Corrina and her teachers in the classroom. Thanks to our audiologists and therapists, our feelings of success were abundant and far outweighed the moments of discouragement along the way.

Corrina, now 6 years old, lives a very active and creative life. She loves to swing and climb, takes ballet and swimming lessons, loves knock-knock jokes and hopes to be a doctor some day. Or an astronaut. Or maybe a unicorn.

Most of all, Corrina lives a surprisingly normal life. She goes to the local school, makes friends at the local park, and sings along with Oh Canada every morning. Now when people meet Corrina they often don't realize she began her life with a huge language delay — they just see her for the beautiful, joyful person she is.