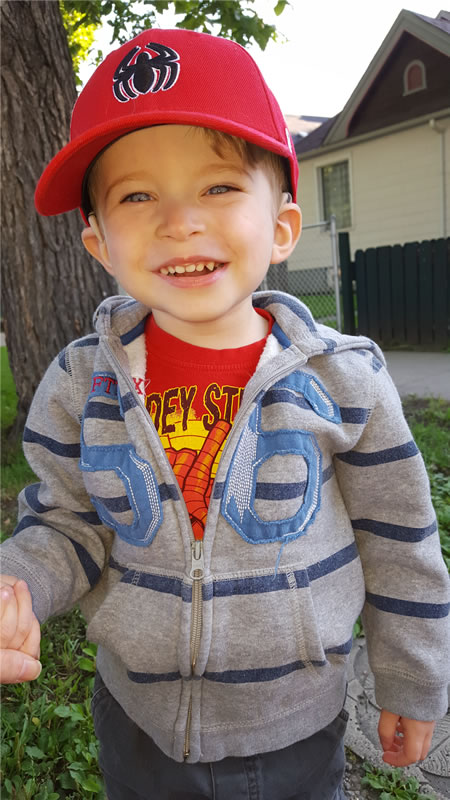 My son Mathew was born hearing. When he was 19 months old he got very ill and was diagnosed with an extremely rare kind of meningitis.  He stayed in the hospital for 3 weeks fighting the meningitis, and he had to relearn many physical abilities such as sitting up, crawling, and walking. After a few routine hearing tests, it was discovered that Mathew had suffered profound hearing loss as well.

Cochlear implants were immediately brought to our attention as the staff at HSC Children’s Hospital thought Mathew would be a good candidate for them. Dr. Darren Laiteo came to see us in Mathew’s room and explained that it was something that would need to be done immediately as with meningitis the cochlea can harden and then you run the risk of losing your chance of being able to use the cochlear implants. So 10 days after being discharged Mat was back in the hospital for the cochlear implant surgery, and 4 weeks later the implants were activated.

Since then we have been going to weekly auditory-verbal therapy sessions at Central Speech and Hearing, have had many audiology appointments and we are overjoyed at the progress that Mathew has been making. Before the meningitis he could speak roughly 10 – 15 words. After the implants were activated it took about 5-6 weeks for Mathew to realize he needed to wear them to hear, then something just seemed to click for him and he would keep them on. Now I am more than happy to say he wears them all waking hours of the day and is a non-stop talker!