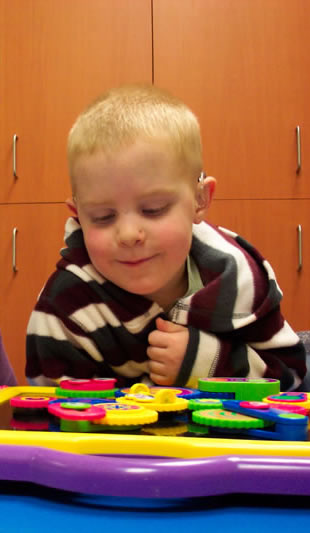 Sammy was diagnosed in 2010 just before age two.

My life began with a rocky start. I could not breathe on my own. I had a severe pneumo-thorax and was in ICU for a week.

Everyone referred to me as the "miracle baby". They said there was NO WAY I should have recovered so fast, or even be alive! I could have had cerebral palsy, or some lack-of-oxygen-related-dysfunctions?? Well, I am now 6 years old, and being hard-of-hearing is the only real handicap that has been detected.

My parents began to be concerned about my hearing when friends of ours, who have a deaf child, picked up the way I screeched, and my lack of responses. My parents just thought that I didn't want to listen. They thought my screeching was a sign of mental retardation. They knew something was wrong, but most friends and relatives told them they were over-sensitive / cautious. They took me to the doctor and he said I had fluid in my ears. This went on for many months. The doctor said I would grow out of it. Life was sooo frustrating during this time!! I tried so hard to tell them what I wanted but they couldn't understand me. They started to teach me the signs for water, milk, hungry, mom & dad. I wanted so badly to communicate with them. Sometimes I had to drag mom over to what I wanted and point to it. When people spoke to me I could only hear slurred sounds, I very seldom could hear clear words... what a confusing world to grow up in!

Finally, I had my 2 year old assessment with the Child Development Clinic. They picked up on our concerns right away and set in motion different appointments to get my hearing checked. Sure enough, I had permanent damage in my cochlea. Soon I got hearing aids ~ I affectionately call them MY EARS! They made a BIG difference. Now I could hear all these incredible sounds. Sometimes it was overwhelming, but I was thankful because I now am able to hear much more clearly.

Much to my family's delight, I stopped screeching. I used to be behind most children my age in the ability to communicate my thoughts and feelings with words... but not only can I speak relatively well, I am learning to read and have basically caught up to children my age.

I love my therapy sessions at Central Speech. I love the creative way they teach me through games and play. A whole new world has opened up for me since I got hearing aids and began therapy. I am learning to communicate verbally, and to 'listen' to sounds around me. We all get frustrated less and less as we learn the skill of listening and developing communication through speech. I really am excited about life. I love tractors, trucks, and animals. I believe that I will develop and function normally alongside those I  come across in the world around me.

The main thing we, as parents, have come to realize is that it is very important for a person
communicating with a hard-of-hearing child to speak directly to them and if there is background noise MAKE SURE your child is hearing you clearly.