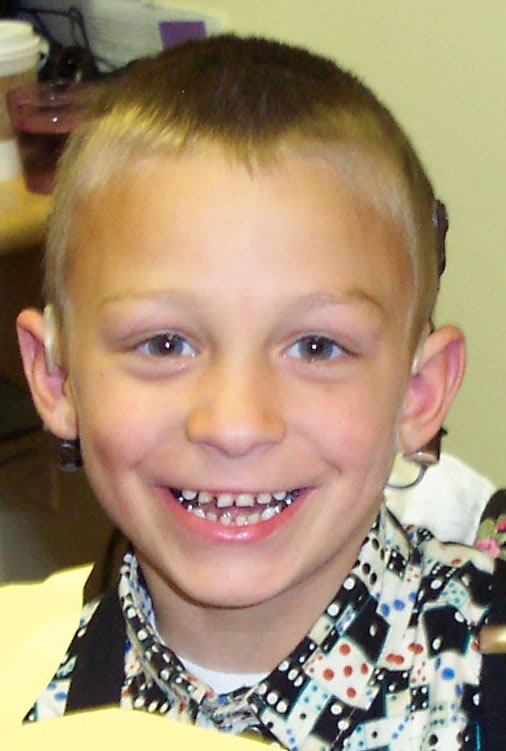 I am the proud mother of our hearing impaired miracle. Our first born son, Jared, was born September 28, 2003. He was diagnosed with a profound bilateral sensorineural hearing loss a week after his first birthday. This was no surprise to us, for we noticed that he didn’t respond to sounds at home when we did our own testing.  We faced the challenges of a hearing impaired child with strength and determination. It hurt to have a deaf child but God made him to perfection. It was His way and to Him be all the Glory. Due to the length of time that it took for us to get him tested and referred, Jared was fitted with hearing aids at 14 months. We then started our weekly one-hour auditory-verbal therapy sessions with Debbie Brown at Central Speech and Hearing Clinic. Finally, after three months, we had to quit using the hearing aids as they were no longer providing Jared any benefit. Over the next few months we did lots of research and decided on a cochlear implant. We chose a cochlear implant because we wanted our child to have the best opportunity to live an independent, spontaneous life and to have the opportunity to communicate orally with each and every person he meets.

On September 19, 2005 a week before his second birthday, Jared underwent cochlear implant surgery at the Hospital for Sick Children in Toronto by Dr. Blake Papsin. It was a day of fears, frustrations, and prayers for us, but mostly the opening of a door of new and wonderful beginnings for Jared. Initial activation a month later brought a smile to Jared’s face. This was his first day to hear mommy and daddy’s voice. Jared is proud to wear his Nucleus Freedom implant system.

Since then we’ve continually worked on his auditory-verbal goals at home integrating and modeling them into everything we possibly could think of, training family members to do the same. At a hearing age of 9 months, Jared was blessed with a healthy little sister and she was a huge learning experience for him, bringing lots of language just when he started talking.

On August 21, 2008, just before his fifth birthday, Jared again underwent cochlear implant surgery with Dr. Papsin on his left side. Here Jared helped us make the decision and told us he wants to hear on his other side also. Having to put him through the surgery again was our main concern, but we kept thinking positive. We chose bilateral so he’d be able to hear speech in noise better, correctly identify sounds, better localize sound and as I put it… two ears are better than one. Before we had left the hospital that time, we knew already that we had made the right decision. Upon recovering from the surgery, Jared had a raging temper, tore off the gauze around his head twice making Dr. Papsin come out of the O.R. room to fix it, in order to not hurt himself.  The four of us had to hold him down and not even the nurses had anymore suggestions on what to do. This had been going on for a couple of hours until we decided to put on his first implant. From the second we put it on, Jared calmed down, we told him what was happening and reassured him, and then he fell into a peaceful four-hour sleep. The feeling was indescribable, and we knew we made the right choice.

When Jared was 2.5 years old, he was entered into our local daycare centre. There, his teachers were trained to integrate the a-v goals, using English as Jared’s first language where possible, as well as model for him and using the FM transmitter where it was needed. Here he was introduced to 10 of his hearing peers, learning to share, get along with other children and most of all, listen. His hearing age at this time was only 6 months.

Jared also received instruction from a teacher in the preschool outreach program from SMD, biweekly. This program focused on promoting language and listening skills while teaching basic school skills.

We also participate in every parent meeting we can and gather as much information and ideas as possible. Meeting new families and sharing our stories is always a bonus for us.

The Summer Gap program that we enrolled Jared into in 2010 was very helpful and improved his overall language development and schooling.

We believe living on a colony has helped Jared tremendously with his development of speech. By living a colony life, we try to live accordingly to the scriptures of Acts 2: verses: 42-44. The culture and security of colony life makes it easier for him to adapt to his hearing impairment. The good models he gets from adults, like being in the carpenter shop with dad, gathering eggs in the chicken barn with friends, weeding in the garden, watching the cows milking, or being present when his uncles are working in the fields shows for the rich language that surrounds him.

Jared also has more opportunities to interact with children living in the community. Starting with colony routines by having breakfast, lunch, and supper with all 31 school children, where they all know the opening and closing prayers and recite it when their turn comes. He also attends our daily evening service and Sunday school as well as playing with his peers in their free time.

Jared attends our local German and English school here on the colony. Even though our first language is German, we chose to teach English as his first language in order to get the best output possible from the goals and strategies offered to us by the professionals at Central Speech. We’ve found this very helpful and since then, Jared has learned to speak German and uses it as his first language now. High German is used in church and school where he can now fluently read and speak this language. So in all we have a hearing impaired son, and he speaks 3 languages!!

As parents, most of us want our children who are deaf or hard of hearing to attend regular classes and compete on the same level as their peers with normal hearing. There’s no doubt that we were concerned about Jared’s ability to make the leap from home, where we knew him better than anyone else, to a teacher who never taught a child with hearing loss before. We’re pleased to report he’s doing well. It is understandable that teachers may feel uneasy about holding a child with hearing loss as equally accountable as their peers with normal hearing. In general, I feel strongly that expectations should not be lowered for students with hearing loss.

It takes a team to successfully mainstream a child with hearing loss. All parties need to communicate with one another and be kept informed, in any form, with the child’s best interests in mind.

Communication needs to have a purpose; it’s not done because someone else does it, but because it’s important for the whole team. All parties need to know the skills being practised, at school, at home, and at Central Speech. Together they need to encourage and support each other. Working with hearing impaired children provides many challenges, but also many rewards. If the team is able to remain positive in communication and discuss any problem directly with the people involved, this will avoid many problems and will assist in creating and delivering highly effective programs to meet the child’s needs. For our son, we have a communication book, a key part of helping him achieve success. This is meant for the teacher and parents to be our ongoing indicator of what we must work on and what has been worked on, with Jared.  We also use the book to identify his needs with respect to his development and health. For example, if Jared has had an especially challenging day at school, this may indicate an equipment malfunction or inner ear infection, both of which are very serious issues for an implanted child. Likewise, if he’s having difficulty with specific language or concepts, we need to be able to support those needs. As parents, we rely on Jared’s educational team to provide us with specific details in the communication book.

Jared loves school and has just begun grade 2. He’s growing to be more independent and mature, leaving the professionals that come to visit at school, so impressed. They always tell us he’s so much like all the other kids in the classroom, would they not know his history, they wouldn’t notice that he’s any different from any other child. Jared loves to socialize and has many opportunities to talk about things including school, his pets, and anything he runs into on the colony. He’s using language to the best of his abilities… he talks and talks until he falls asleep at night! And we feel we have so much to be thankful for. Before, we put our faith in the doctors, professionals, in God and in Jared himself for everything to work out, and today, he still amazes us!!!